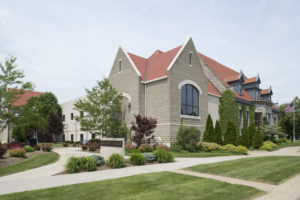 On November 5, 1895, the Library Association of Sandusky was incorporated under the laws of Ohio and has since given free library service to all residents of Erie County.

In 1870, the books and property of the Young Men’s Christian and Library Association were turned over to a group of unusual local women organized under the name of the Library Association. They were determined to succeed and ran their small subscription library ($2/year membership fee, and the city appropriated one-tenth of a mill of city tax levy for its support) from a room in the high school until 1896. Later, they were in the Masonic Temple. By 1886, they formed the Library Building Fund to raise money to purchase or build a library in the future. The ladies had asked for a location on the east public square but the city refused, so the group looked elsewhere, although they felt they were by right entitled to a place on the square. They worked diligently to secure money, sponsoring over 50 plays, lectures, and musicals. In 1898, they had collected enough money to purchase the James Woolworth home on the southwest corner of Columbus Avenue and Adams Street for $10,000. The location was ideal and the house large enough to serve as a temporary library.

Through the efforts of Sanduskian Mrs. Jay O. Moss, in 1899 Andrew Carnegie, wealthy philanthropist, offered to give $50,000 for a public library in our city. The ladies were ecstatic! Mr. Carnegie specified that the city must give $3,000 per year to maintain the building, which they agreed to do. The contract for the building was awarded in the summer of 1900 and the building completed in 1901. Sandusky’s library is one of the three earliest Carnegie Libraries in Ohio. The Gala Opening Dedication was held July 3, 1901.

Beginning in 1912, the Library received funding from the Erie County Commissioners, and services were offered to all residents of the county through an annual contract of the Library and the Commissioners.

By 1931, property tax support was cut off for Ohio’s public libraries. Because of the efforts of State Senators Robert A. Taft (Hamilton) and Frank E. Whittemore (Summit), legislation was passed in 1933 to provide funding from an intangible tax imposed on stocks and investments and collected at the county level. Sandusky Library received its funding from this avenue until 1986, when the Ohio Legislature abolished the tax.

In 1973 the Board of Trustees of the Sandusky Library assumed the responsibility of the Lange Trust. The Norbert A. Lange and Marion Cleavelend Lange Trust, using no public money, underwrites the presentation and sponsorship of cultural and educational activities for the Sandusky/Erie County community. The Lange Trust Committee, comprised of no more than eleven members, aids the Library Board in fulfilling the stipulations put forth in the will of Norbert A. Lange.

The Library was placed on the National Register of Historic Landmarks on November 12, 1975. The property is listed on the National Register under Criterion A for its association with events that have made a significant contribution to the broad patterns of our history. It is also listed under Criterion C for its distinctive characteristics of a type, period, or method of construction, because it represents the work of a master, possesses high artistic values, or because it represents a significant and distinguishable entity whose components may lack individual distinction (e.g. a historic district).

Since 1986, the Library has been funded with a percentage of the state income tax and has supplemented that amount with a property tax in Sandusky, Perkins Township, and Kelleys Island.

On property adjacent to the Library is the former Erie County Jail, built in 1883. In 1996, the Library purchased the Jail from Erie County and embarked upon a $10 million expansion project to renovate and connect the two National Register of Historic Landmarks buildings with new space, growing from 24,000 to 62,000 square feet. The Grand Opening and Rededication of the new Library was held on January 11, 2004. The innovative re-use of historic space ensures Sandusky Library’s place among the most architecturally unique libraries in the nation.